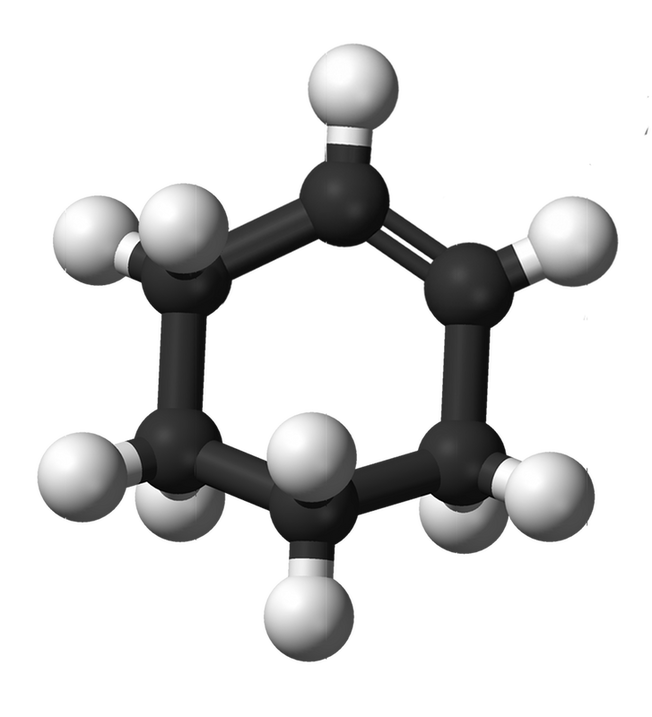 Cycloalkenes are named the same way that open chain chained alkenes are, with the exception that the numbering is started at one of the carbons of the double bond in order to keep the index numbers as small as possible.

Watch the video below on alkenes and cycloalkenes. Skip to 6:02 for an example on naming a cycloalkene.
Naming alkenes is basically the same as alkanes with the only difference being that alkenes has a double bond in it's molecular structure, therefore changing the suffix -ane into -ene.

Basic rules of naming cycloalkenes include:

Rule 2
Give lower numbers to the group/branch encountered first

Cycloalkenes share similar chemical properties to cycloalkanes such as:

- The smaller the ring, the more likely it is to undergo reactions due to the carbon carbon bond angle. For example, the smallest cycloalkene- Cyclopropene is very reactive and has a extremely high strain. Larger compounds show very little ring strain and are less reactive.
- Undergo combustion and Halogenation reactions

However there are also some differences. Cycloalkenes generally are more reactive than Cycloalkanes due to their double carbon-carbon bond. Cycloalkenes also undergo addition reactions, which occurs when the pi bond is broken and two new sigma bonds are formed
(The double bond in cycloalkenes consists of a pi bond and a sigma bond)